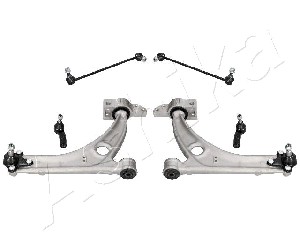 Go Back
1 review(s)
€280.24
Facebook
E-Mail
Print
Reviews
There is no reviews yet
Charles Ocheret
Good quality! Super fast delivery. Thank you a lot :)

In order to establish a connection between the wheels and the body part of the car, and at the same time eliminate vibrations during the movement of the car, certain devices are used. In this case, we have to talk about the levers, which are one of the main components of the car's suspension. The point is that these elements allow the suspension to move in the desired direction.

Whatever it was, eventually motorists have to deal with the breakdown of these devices. Therefore, it is imperative to know where you can purchase an automotive arm mount kit if needed.

Now, a large selection of such kits is presented, each of which fully complies with the established requirements and standards. In addition, their complete set includes a camber adjustment bolt and other devices that allow the unit to be restored to its previous performance. Of course, each individual arm mounting kit is vehicle-specific.