Go Back
1 review(s)
€242.24
Facebook
E-Mail
Print
Reviews
There is no reviews yet
Charles Ocheret
Good quality! Super fast delivery. Thank you a lot :)

Each individual car requires the mandatory use of certain devices designed to perform certain functions. It should be noted that one of the most common parts for a car is considered gaskets, thanks to which a full-fledged tightness of the power plant is ensured. The thing is that fluids under a certain pressure are regularly circulated in the engine. Therefore, if, for any reason, the tightness is broken, this will lead to a leak or a drop in pressure. In order to eliminate such unpleasant problems in a matter of time, it is recommended to use a repair kit for engine gaskets.

The usage of the CORTECO brand Full Gasket Set, engine

It should be understood that every car lining is in difficult conditions. It is under high pressure, working in harsh conditions. There is constant exposure to aggressive substances, extremely high temperatures, and the impact of various external factors. In this case, the gasket must always maintain its elasticity; it must always provide a high level of sealing. If this part is damaged, then there are many problems. Grease or other fluids leak out, the pressure in the system drops, the efficiency of all engine systems decreases, and the wear of expensive parts increases. 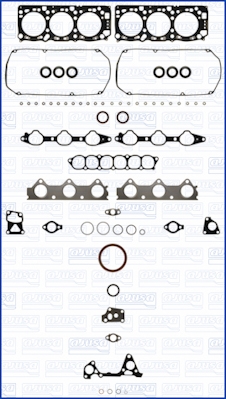